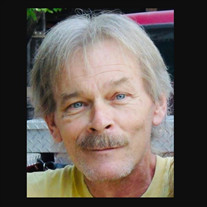 William R. “Randy” Keyer, age 60, passed away peacefully at home on December 19, 2019, Miami Township. He is survived by his children Timothy Opp, Randall Keyer (Megan Caudill) and Drema Keyer (Jarin Johnson), stepchildren David, Samantha & Katie Southard, grandchildren Alexi and Madison, beloved son of Melvin W. Keyer and the late Ruth M. Keyer (nee Kidd), dear brother of Teena Devers (Jimmy), Kelly Keyer (Tonya), Kim Keyer-Scott (Robert), Melissa Goodyear (Brian), Melvin W. Keyer, Jr. (Bambi), Shaun Keyer (Marc) and the late Robert L. Keyer. Also survived by numerous nieces and nephews. Randy grew up in Delhi Township and went on to work at Delhi Auto Body for over 35 years. Beginning with his children’s teams, he was a longtime soccer coach at Farwick Fields in Cleves, Ohio and a respected soccer referee for TCYO Sports. He was known to be a jokester and prankster. He touched so many lives as a coach and referee, many of which we are just now learning about. He was humble and kind, a simple man and a great father. He freely helped others but found it difficult to ask and receive help himself. As the oldest of 8 siblings, he was a force to be reckoned with, knowing when to be kind as well as tough. The only things he loved more than golf, guns, cars and fishing were his children and his family. Unfortunately, at the age of 54, Randy’s health started to deteriorate first with diabetes in 2014, then a heart attack in February 2015 and eventually a diagnosis of ampullary cancer in October 2018. Despite the odds, he lived 14 months longer, fighting valiantly to live as long as possible to be here for his children. He didn’t want to leave them, but his body had other plans. He did get to check off a few things from his bucket list like taking a road trip to Bonita Springs, Florida with his kids to finally experience the ocean. He also went to Pine Needles Golf Club in Pinehurst, North Carolina and followed his sister as she played in a golf tournament. He went fishing with his kids whenever he felt up to it and made sure he was at the annual Keyer family campout in August where we celebrated his 60th birthday. Despite his health issues he never complained and never felt sorry for himself. In fact, just the opposite. He remained hopeful and positive and never accepted the notion that his death was imminent. He made plans for tomorrow and next year even after treatment ended and hospice was called. He loved holidays, especially Independence Day and Christmas. He regularly had 4th of July pool parties that ended in epic fireworks displays. And at Christmas, he was like a kid again. He loved having his tree up early with outside lights and lots of gifts wrapped under his tree waiting for his children. And, even though he didn’t make it to Christmas this year, he made sure there were lots of presents under his tree for those he loved. Gifts we will all treasure, along with our memories of him. He’s now reunited with his infant twin girls, his mother Ruth, brother Bob, and nephew Tyler. May they all rest peacefully. Visitation Friday, December 27th, 4:00 to 7:00 P.M. at the Dennis George Funeral Home, 44 S. Miami Avenue, Cleves, Ohio, where the service will be held Saturday, December 28th at 11:00 A.M. Immediately following will be a burial procession to Moores Hill, Indiana for interment at Forest Hills Cemetery. Memorials may be directed to the family in care of the funeral home.

The family of William R. Keyer created this Life Tributes page to make it easy to share your memories.

Send flowers to the Keyer family.