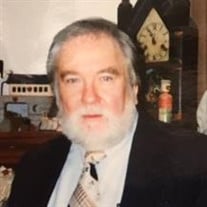 Walter W. "Finn" Harrell, 87, formerly of Cleves, OH, passed away on Wednesday, November 14, 2018. Finn was born in Cleves, OH, on January 17, 1931, son of the late Walter J. and Emma (Spronk) Harrell. Finn was a lifelong resident of Cleves until moving to Trappe, PA, in June 2018. He was a member of the Miller-Stockum American Legion and a Freemason. He was a former member of the Cleves Village Council and Trustee of Miami Township, OH. Finn worked for many years as an advertising copywriter and indulged in his love of jazz music by also working for WNOP, known as "The Jazz Ark." He served honorably in the U.S. Army. Finn was the husband of the late Mary Judith "Judy" Harrell (nee Echelberger). He is survived by his daughter, Samantha (Craig) Cardimon of Trappe, PA. Along with his wife, he was preceded in death by his stepdaughter, Kathe Gongwer and sister, May Sonner. Friends are invited to greet the family Sat., Dec. 1, 12 PM until time of life celebration at 1 PM, both at the Dennis George Funeral Home, 44 S. Miami, Cleves, OH 45002. Memorial contributions may be made to the Miller-Stockum American Legion Post 485, 29 East State Road, Cleves, OH 45002

The family of Walter W Harrell created this Life Tributes page to make it easy to share your memories.

Send flowers to the Harrell family.