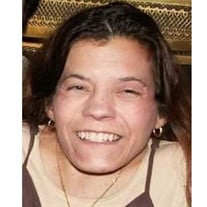 Tina Louise Breitfelder (Bugan) Of North Bend, OH passed away on November 23rd, 2020 at Good Samaritan Hospital in Cincinnati, OH. She was born June 8th, 1970 in Dover, NJ. Her parents Jon and Betty Bugan spent the first 4 years of her life raising her at Fort Bragg, NC until they moved to Mine Hill, NJ in 1974. It was there that she met her best friend Suzy Deming in 1975 and they remained best friends for the past 45 years. Suzy and her parents, Pat and Phyllis Deming and their five children were Tina’s second family. She and her sister, Tracy Ulrich(Bugan) grew up with the Demings and spent countless hours playing in the woods, sleigh riding, and riding bikes with the entire Deming family. She attended Hattie Rice and Dover High school until 1987 when her parents bought their first home in Branchville, NJ on Culver Lake. There she finished her senior year and graduated from High Point Regional High School in 1988. it was there that she learned to drive, had her first job, and despite not being able to swim, won 1st place in a sailboat competition on the lake with her dad. There was nothing that stopped Tina from overcoming any obstacle or accomplishing any goal she set her mind to. She attended Drew University from 1995-1997 and then transferred to Western Michigan University in 1997. It was there that she met Michael Breitfelder and they moved to Ohio in 1997. She worked for the Duro Bag Company as an administrative assistant for many years. The two eventually married in July 2000. In 2004, she miraculously gave birth to her son Zachary Breitfelder. She was the most dedicated and loving mother and spent countless hours playing board and video games together, she was a Den mother to his Boy Scout Troop, she supported him every step of the way throughout his schooling, sports teams and especially throughout his MMA, in which she was given the nickname, The Phoenix, by one of his MMA coaches. She loved cooking and baking, adored her cats, the family dog Molly, crocheting, scrap booking, painting, socializing, making new friends and keeping in touch with all her friends from over the years. She was baptized as a Presbyterian and most recently was attending church at the Faithful Fellowship. She had an extremely huge circle of amazingly supportive friends both in NJ and Ohio, who absolutely adored her and her infectious laughter and smile. She thrived because of their love and support and they will always be considered as her and her son’s extended family. She is survived by her son, Zachary Breitfelder and her husband Michael Breitfelder of Harrison, OH, her parents Jon and Betty Bugan of Branchville, NJ, her sister Tracy and her husband Paul Ulrich and their two daughters, Cassidy and Alana of Wolcott, VT. Her Aunt Agnes Bugan, of Mine Hill NJ, who was one of her biggest supporters, and her cousin Jessica Elsas and her son Jack of TX and her cousin Christina Reppert of VA. She was predeceased by Zachary’s grandparents Helen and William Breitfelder, her sister in law, Georgia Getz and her niece Cassidy Getz, her Uncles Phil and Steve Bugan, her Aunt Terry Teague, her maternal grandparents Erma and Raymond Reppert, and her paternal grandparents Agnes and John Bugan. Services will be announced at a later date. Please use the following link to view the memorial picture video. https://www.tributeslides.com/tributes/show/324L9Q4BH68QHM98

The family of Tina Louise Breitfelder created this Life Tributes page to make it easy to share your memories.

Send flowers to the Breitfelder family.