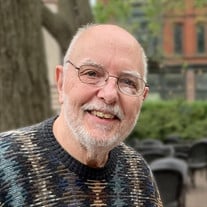 Thomas Edward Hohmeister, 75, of Bright, Indiana, passed away in the early morning hours of March 24, 2021. While his later years were diminished by dementia, the legacy he leaves is filled with love, lessons learned and lots of laughter. Born December 3, 1945 in Cincinnati, Ohio to Beatrice and William Hohmeister, teenage Tom had a reputation for fast cars and skipping school. Though his memory sometimes failed him later in life, he could still tell tales about blocking off the windy roads of Clifton for epic drag races. This early love of cars turned into Tom’s livelihood – he was a master mechanic for over fifty years. Clifton is also where Tom met his wife of nearly 52 years Elaine (Orebaugh). They met six months before Tom was called to serve in Vietnam (Army, Charlie Company, 4th Infantry Division – 1965 - 1967) and were married after his tour of duty. They settled in Cheviot, Ohio and had a daughter Susan and son Kevin, along with a dog named Snippy. Throughout his life, Tom was a bright light in many people’s lives and the life of the party in any group setting. He taught his grandchildren the art of a good trick and how to make the best silly faces. He loved music and used to crank Donna Summer’s "She Works Hard For The Money" off of a cassette player in his Dodge pickup, much to the delight of the neighbors. A member of Dearborn Hills United Methodist Church, Tom would often visit senior friends and never forget to bring along a welcome smile. Often, he returned with baked goods, which he very much enjoyed. In addition to his love of cars, Tom also enjoyed being on the water, digging into a juicy grilled steak and telling a good fart joke. Everyone knew his favorite boat saying: "The best days in a boat owner’s life? The day you get the boat. And the day you sell it." Truth spoken by a man who had to be towed to shore more than once after cruising on the Ohio River. Tom was an incredible Husband, Dad, Poopa, Son, Brother, In-Law and Friend and will be dearly missed. He is survived by his wife Elaine, children Susan Hague (Phil) and Kevin Hohmeister (Amie Stacy – deceased), his grandchildren Jackson and Sophia Hague, sisters Susan Trentman (Jerry – deceased) and Karen Dornhagen (Bob – deceased), brothers Bill Hohmeister (Peggy) and Barry Hohmeister, brother and sister-in-law Julie and Larre Orebaugh, numerous nieces, nephews and the many friends that spanned his life from first grade to 2021. A celebration of Tom’s life will be held Sunday, May 16 at 1:00PM at Dearborn Hills United Methodist Church, 25365 State Line Rd, Lawrenceburg, IN 47025. Tom donated his body to science and always joked, "Maybe they’ll find something interesting in there." Memorial donations can be made directly to Crossroads Hospice (www.crhcf.org), the Alzheimer’s Association for dementia research (www.alz.org) or dropped off at Dennis George Funeral Home, 44 South Miami Avenue, Cleves, OH 45002.

Thomas Edward Hohmeister, 75, of Bright, Indiana, passed away in the early morning hours of March 24, 2021. While his later years were diminished by dementia, the legacy he leaves is filled with love, lessons learned and lots of laughter. Born... View Obituary & Service Information

The family of Thomas E. Hohmeister created this Life Tributes page to make it easy to share your memories.

Send flowers to the Hohmeister family.