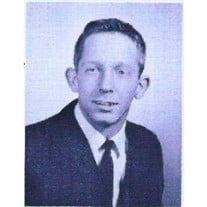 On Friday, August 20, 2021, Terry L. Heath, loving husband, and father, passed away at age 74. Terry was born on March 14, 1947, in Milan, Indiana to Charles and Lucille (Eckstein) Heath. He served proudly in the U.S. Army as a truck driver and a forward observer on OH-6 helicopters during his two tours in Vietnam between 1967-1969. For his extraordinary service he was awarded the Bronze Star Medal, Air Medal (w/14 Oak Leaf Clusters), Purple Heart (w/1 Oak Leaf Cluster) and the Aircraft Crewman Badge. Following his military service, he received his Bachelor’s from Eastern Kentucky University and his Masters from Xavier University. On December 19, 1970, he married Martha Jane Coleman. They raised two sons, Matt and Mark, as well as being the parents to multiple other students of theirs over the years. Terry had a passion for hunting, fishing, farming, and making the world better by being a teacher and mentor to the students of both, Campbell County and Lawrenceburg High Schools. The highlights of his time as a teacher were when one of his former students would gain achievements in their chosen fields of employment. His passion was watching the growth of his students and ensuring they were prepared for the challenges of the world in addition to being successful in his courses. Terry was preceded in death by his father, Charles, his mother Lucille, and his bride of 39 years Martha. He is survived by his brothers Larry (Cindy) and Gary “Lucky” (Marsha), his sister Bonnie (Terry), his children Steven “Matt” (Anna) and Mark Heath, his grandchildren Nathaniel, Benjamin, and Evan, as well as numerous nieces, and a host of children he and Martha unofficially adopted. A visitation will be held on Wednesday, August 25, 2021, from 6-9 pm, at Dennis George Funeral home at 44 S. Miami Ave, Cleves, Ohio, and a graveside service will be held on Thursday, August 26, 2021, at 10:00 am, at Maple Grove Cemetery, Maple Grove Cemetery Rd, Cleves, Ohio. Flowers may be sent to Dennis George Funeral Home. To send flowers or a memorial gift to the family of Terry Heath, please visit our local florist at https://naturenookonline.com/.

On Friday, August 20, 2021, Terry L. Heath, loving husband, and father, passed away at age 74. Terry was born on March 14, 1947, in Milan, Indiana to Charles and Lucille (Eckstein) Heath. He served proudly in the U.S. Army as a truck driver... View Obituary & Service Information

The family of Terry L. Heath created this Life Tributes page to make it easy to share your memories.

Send flowers to the Heath family.