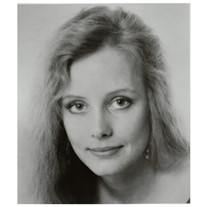 At the stroke of midnight on April 25, 2022, Stacy Amezcua passed away due to natural causes in her home in Cleves, Ohio. She spent the last week of her life receiving love and support from her immediate family: Oscar Amezcua, her husband; Nicole Mathis, her sister; Danielle and Evan Amezcua, her children. The underlying cause of death resulted from her decade-long struggle with Primary Progressive Multiple Sclerosis (PPMS)—an autoimmune disease that targets the brain’s white matter cells. PPMS gradually eroded Stacy’s physical and mental acuity over the years, leaving her disabled and unfit to care for herself. Among the worst symptoms was the ever persistent fading of the charismatic and self-possessed woman that people came to know and love. On January 17th, 1965, Stacy Amezcua, named then as Stacy Mathis, was born in Las Vegas, Nevada to parents Gerald Wallace Mathis and Shannon Whitlock-Mathis. A few years later on April 30, 1968, she received a sister in her company, Nicole Mathis, and the two grew up together in a single-family home on Factor Ave. From an early age, Stacy demonstrated an enormous capacity in the performance arts, ranging from ballet, piano, debate, writing, and acting. Following her graduation from Bonanza High School in 1983, Stacy yearned to hone her acting talents and pursued minor modeling jobs for exposure. She would later apply and receive acceptance from the California School of Dramatic Arts and even Georgetown University. She decided to take a year break before enrolling in college and found a steady job as a waitress at a Mexican restaurant franchise called Ricardo’s. It is here that fate, commonly disguised in life’s most mundane circumstances, would have her meet her future husband: Oscar Amezcua. Oscar’s recent pilgrimage from his native country of Mexico left him bereft of two things the average American needs: a job and a ride. He started working at Ricardo’s as a busboy and soon cinched a promotion to waiting tables—but reliable transportation proved to be a little more elusive. The night he asked Stacy altered their lives for the years to come. What normally was a quick detour to his home, turned into an hours-long bonding experience for the two. They would talk well into the wee-hours of the morning, and this became routine for the new-found friends many nights after the first. The two were married on October 7th, 1989. They had a son, Evan Amezcua, born on September 25, 1991, and a daughter, Danielle Amezcua, born on January 10th, 1993. In the early nineties, Stacy found full-time work as a licensed masseuse, while Oscar worked at Citibank and part-time at American Airlines. Yearning for a more stimulating and profitable trade, they began research about real estate and property investing. They bought a newly built home in June of 1990, the first completed residence in the up and coming Whitney Ranch neighborhood. To save money, Stacy taught herself the necessary home-builder trades: carpentry, flooring, plumbing, electrical work, painting, and, her personal favorite, design. The couple proved to be a capable and excellent team, and their efforts raised the market value of their first property. Over the years, they would acquire a few more properties, fabricate necessary renovations, and list them as rental properties. They eventually moved and settled in Wilmington, North Carolina in 2006, yearning for a change in scenery and more favorable property market prospects. While at the height of their success, fate had intervened once more. The Global Financial Crisis of 2007 had effectively crippled their real estate business. But not wanting to give in to hopelessness, Stacy realigned her focus to becoming an Ultrasound technician, seeking job security and an intellectually stimulating trade. Though bright, steadfast, and strong-willed, fate proved more persistent. Her diagnosis of PPMS in 2012 robbed her of all physical and mental autonomy. In the years following her diagnosis, her husband and children devoted all their efforts to maintaining her health and care. Never did they consider sending her to a nursing home or facility, never did they give up on seeking out alternative treatments and operations, and never did they feel comfortable without at least one of them by her side at all times. They had loved and adored the woman who had spent her entire life trying to build a better one for her family. For her final request, Stacy asked for her ashes to be scattered near the ocean. Her family will see to her request in a private ceremony. She asked for no other service to be held.

At the stroke of midnight on April 25, 2022, Stacy Amezcua passed away due to natural causes in her home in Cleves, Ohio. She spent the last week of her life receiving love and support from her immediate family: Oscar Amezcua, her husband; Nicole... View Obituary & Service Information

The family of Stacy Amezcua created this Life Tributes page to make it easy to share your memories.

Send flowers to the Amezcua family.