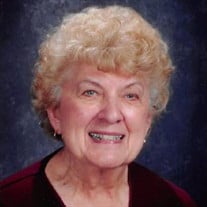 Mary Guethlein Schneider, beloved wife of the late Theodore W. Schneider passed away peacefully at her home on February 23rd, 2020 at the age of 96. Born in Cincinnati, Mary was a graduate of Western Hills High School and the University of Cincinnati Conservatory of Music. Beginning her career in the Cincinnati Public School System teaching both art and music, her devotion to the field of education extended over fifty years. Her tenure as choral music director at Western Hills High School (WHHS) spanned from 1964 through 1983. Stacey Woolley of the Cincinnati Symphony Orchestra remembers Mary or "Mary Mom" as her many students at WHHS affectionately called her, as "a force of nature." "Because of her presence, the choir room became a sanctuary for kids in trouble and a refuge for those who didn't quite fit in. The WHHS Studio Choir was "Glee" long before there as a TV show. Although I was never in her choir class, I would spend hours each week in the choir room because Mary Mom would let me practice violin there, encouraging me in my quest to get into the Cincinnati Symphony Orchestra someday. And it was she who set my late brother, Scot Woolley, on his career path. I and countless others have lost a mentor, an inspiration, and a friend." In 1998, Mary returned to the classroom at St. Aloysius - on -the- Ohio, where, for several years, she again, shared her passion for teaching. Mary also acted as the church's music director until her retirement in 2019, at the age of 95. She is survived by her children, Michael Schneider of Texas, Theodore (Vanessa) Schneider of Kentucky, Barbara (Edward) Mangini of Connecticut, and Thomas (Pegge) Schneider, her sisters, Jean Michaels and Edith Richardson of Scottsdale, Arizona, her dear grandchildren, Lauren (Andrew) Cash, Jessica Schneider, and Thomas C. Schneider, two great-grand children and several nieces and nephews. She was predeceased by her brother, Albert Guethlein. Memorial contributions may be made to the Wright State University Foundation, Scot G. Woolley Memorial Scholarship or to a charity of your choosing, c/o the funeral home. Visitation Wed., Feb. 26, 4-8 PM at the Dennis George Funeral Home, 44 S. Miami, Cleves, OH. Funeral Mass Thurs., Feb. 27, 10:30 AM at St. Aloysius on the Ohio Church, 134 Whipple, Cinti., OH 45233 (Sayler Park). Entombment following at St. Joseph Old Cemetery.

Mary Guethlein Schneider, beloved wife of the late Theodore W. Schneider passed away peacefully at her home on February 23rd, 2020 at the age of 96. Born in Cincinnati, Mary was a graduate of Western Hills High School and the University of Cincinnati... View Obituary & Service Information

The family of Mary G. Schneider created this Life Tributes page to make it easy to share your memories.

Send flowers to the Schneider family.