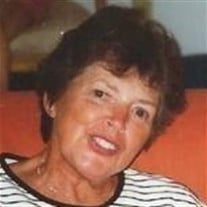 Mary Elizabeth "Liz" Russell Pawleys Island Liz Russell, 90, died Aug. 5, 2018, at home. She was born Aug. 24, 1927, in Cincinnati to the late Lucretia (nee Stephens) and Samuel Foster Montague. A graduate of St. Petersburg (Fla.) High and the University of Kentucky, she was a member of the Alpha Delta Pi sorority and was chosen the Sweetheart of Sigma Chi at UK. In 1949 she married college classmate Donald Ray Russell, who survives her, as do their daughter, Patricia Lee Russell, and husband Marc Camin, San Diego; sons Stephen Montague Russell, Pawleys Island; Don Taylor Russell and wife Catherine, Charlotte; and David Foster Russell and wife Robin, Myrtle Beach; grandchildren Carlin, Stephen, Temperance, Foster, Grainger, and Miranda; three nieces and a nephew; and three sisters-in-law. Brothers Alan and Samuel "Boz" Montague predeceased her. In addition to being a devoted wife and mother, Liz was a warm and welcoming hostess wherever Don's career as an executive in the paper and packaging industry took them: St. Louis; Cleveland; Cincinnati; Westport, Conn.; Minneapolis; Columbus; Middletown, Ohio; and Hartsville. They retired to Pawleys Island in 1988. No matter where she lived, Liz was active in civic events and charities. In Columbus, she volunteered for the American Heart Association. She also served as a volunteer and player host for the PGA tournament held at the Columbus Country Club in 1964. In Middletown, she was active in the Women's Auxiliary for Middletown Hospital and co-chaired the Middletown Federation of Women's Clubs' annual Charity Ball. In South Carolina, she served on the Governor's Task Force to address litter. Liz was an avid sports and fitness enthusiast. At UK, she was elected to the varsity cheerleading squad as a freshman and later was head cheerleader. Before starting her family, she taught physical education at Taylor High School in North Bend, Ohio, where she also coached the cheerleading squad, the swim team and the track team. Later, when she discovered physical education wasn't offered at her youngest son's school, she volunteered her services, creating and teaching a phys. ed. program there for several years. She kept up her athletic pursuits, playing golf and tennis throughout her adult life. For all her interests and activities, Liz's greatest passion was music. She directed choral groups while in college, sang in church choirs and directed the youth choir at St. Alban's Episcopal Church in Bexley, Ohio. Singing was at the center of every family gathering, where she enjoyed harmonizing on favorite old songs with her father and brothers and on new favorites with her children and grandchildren. And nothing thrilled her more than watching sons Steve and Don perform as The Russell Brothers in venues up and down the Carolina coast. The family will receive friends 4:00 PM to 6:00 PM Friday, August 10, 2018 at Liz's residence. Graveside service Monday, August 13, 11 AM, Maple Grove Cemetery, Cleves, OH. In lieu of flowers, donations can be made to The Michael J. Fox Foundation, at mjfox.org Sign an online guestbook at www.goldfinchfuneralhome.com

The family of Mary Elizabeth Russell created this Life Tributes page to make it easy to share your memories.

Send flowers to the Russell family.