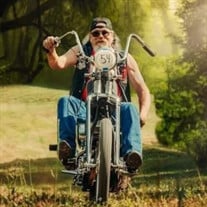 Jack Keith Reincke “Fixx”, 67, Resident of Cleves, Ohio, passed away December 2, 2021. He was born August 4, 1954, in Cincinnati, Ohio, the son of Jack & Patricia (O’Flaherty) Reincke. Jack married his loving partner Mary Jo and settled in Cleves, Ohio. They recently celebrated 40 years of marriage. Jack was a founder and loyal member of the Northern Kentucky Harley Riders of Glencoe, KY and was a career Journeyman Lineman in the IBEW for 40+ years. In addition to his parents, Jack & Patricia, he was preceded in death by his son, Keith W. Reincke. Surviving him in addition to his wife, Mary Jo (Gyarmati), are his sons, Kurr P. Reincke & Vonn G. Reincke, grandchild, Keith J. Reincke, great grandchildren Emmeri, Asher, & Harley Reincke, brother Scott (Diana) Reincke, sister Debbie (Bob) Bailey & many nieces & nephews. Jack had a great passion for building and riding antique Harley Davidson and Indian motorcycles. He was known for his quick wit, for being hardworking, honest and direct and was highly respected by all that knew him. He was an adventurous sort who squeezed more living in his 67 years than most men could in 100. Jack was always ready for a laugh or ride with his beloved NKHR’s and others of his extended motorcycle community. He will be missed greatly. Visitation Thursday, December 9, 2021, from 4-7 PM where the service will be held Friday, December 10, 10:00 AM at Dennis George Funeral Home, 44 S. Miami, Cleves. Burial will follow in St. Joseph New Cemetery.

The family of Jack Reincke "Fixx" created this Life Tributes page to make it easy to share your memories.

Send flowers to the Reincke family.