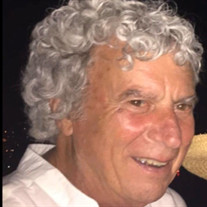 Gary A. Hanlon, 76, January 22, 2020, Madeira. Beloved husband of Becky Schnell Hanlon (nee Bruemmer), beloved son of the late Eugene "Gene" and Evelyn "Evie" Hanlon (nee Gutzwiller); dear brother of Diane Powell (Charles), Michael Hanlon (Nicole), Julie Loughrey (Edward), Melissa Marker (Dean) and Kevin Hanlon (Melissa). He is survived by his children: Darby Hanlon, Cary Hanlon, Curtis Hanlon, Shana McIntire (nee Hanlon), five grandchildren and stepdaughters Paige Fenner and Julie Schnell. Gary was a 1961 graduate of Taylor High School and received a Fine Arts degree from the University of Cincinnati DAAP program. Gary had an illustrious career in graphic/environmental design worldwide. He worked for world renowned design firms such as Saul Bass Design and RichardsonSmith before forming his own design firm, Hanlon Design Group. He was instrumental in designing many iconic logos including Bell Systems/AT&T logo, Rockwell International, Jif peanut butter, identity logos for Vail and Steamboat Springs, Colorado and numerous others. Gary's career included teaching environmental design courses at the University of Colorado, in Boulder, as well as being a lead speaker at various design conferences around the world. He later applied his environmental design skills in helping layout several land development projects around the country, including a major endeavor with the Howard Hughes Corporation in Nevada, called Summerlin, just outside Las Vegas. He had been a member of the IDSA (Industrial Designers Society of America) and won a plethora of awards and recognitions for his work in graphic design worldwide. In his later years, Gary enjoyed painting in his studio, where he produced an assortment of acrylics on canvas and mixed-medium works of art. Friends may greet the family Wednesday, January 29, 10:00am until time of Mass of Christian Burial at 11:00am, at St. Joseph Church, 25 E. Harrison Ave., North Bend, OH 45052. In lieu of flowers, memorials may be directed to Hospice of Cincinnati www.hospiceofcincinnati.org or to the American Cancer Society at www.americancancerfund.org

The family of Gary A Hanlon created this Life Tributes page to make it easy to share your memories.

Send flowers to the Hanlon family.