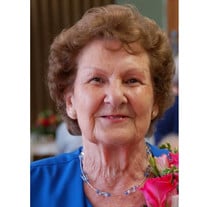 Elnora Marilyn Humphrey Born in Ironton, Ohio on September 3, 1925 to William Berkley “Sid” Dilley and Hilda Faye Dilley. Survived by brothers Berkley and Jim Dilley and sister Marcella Kelly. Preceded in death by her brothers Larry and Carl Dilley and sister Louise Bennett. Elnora began working at Kresge’s Department store at the age of 16 and continued working there through high school. After her high school graduation Elnora went to Columbus with her sister Louise and three close friends. Elnora was a secretary at the Army Depot for three years. She returned to Ironton to take care of her mother who had broken her ankle. Her next job was being a stenographer for her father at Dilley Auto Sales. On June 13, 1948 Elnora married Norval Humphrey sharing 71 years of marriage. Elnora placed her career aspirations on hold to nurture their five children with their interests including school activities and athletic competitions. Elnora expressed her devotion and duty as a Christian by serving and helping at Zion United Methodist Church for 63 years. She was involved in the Senior Center, delivering Meals on Wheels, helping the homeless program and volunteering in the schools’ PTAs when her children were growing up and was a leader of the Girl Scouts. Her hobbies included sewing as Elnora was an accomplished seamstress (also teaching her girls to sew), gardening as she loved flowers, belonging to several card groups and enjoying the time with her friends. Elnora was beloved by family and friends for her boundless acts of compassion and love. She was an amazing mother with endless amounts of energy that radiated to all those around her. She had a heart of gold, always a bright smile and a positive outlook on life. Many people referred to Elnora as a saint as she was a wonderful giving person. Elnora and Norval had five children; Scott ( deceased July 4, 2015), his son Sven married to Robyn Voshardt; Sandy married to Rodger Woock, their daughter Erica married to Scot Davis and they have four children, daughter Elizabeth and son Carl; Anne married to Alan Diers, their daughter Heather married to David Janiak and they have two children, and son Dillon married to Darica and they have two children; Nora Humphrey, her son Ian Morrall married to Yang Song, and son Trevor Morrall with partner Chloe Sampson; Guy Humphrey with partner Jee Leong Koh; 8 nephews and 14 nieces. The Lord called Elnora to be with him on September 27, 2020. Contributions can be made to Zion United Methodist Church or University of Cincinnati Foundation/Cancer Center. Memorial service Saturday, October 10: 2 pm service, 1-2 pm visitation, reception following the service at Zion United Methodist Church, 4980 Zion Rd., Miami Heights, (Cleves, Ohio 45002).

The family of Elnora M Humphrey created this Life Tributes page to make it easy to share your memories.

Born in Ironton, Ohio on September 3,...

Send flowers to the Humphrey family.