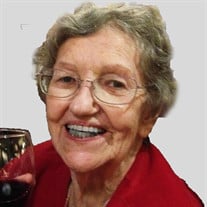 Betty Rittenhouse Sehlhorst May 3, 1926 – July 16, 2020. Age 94. Betty was the last person of 5 generations of her family to be born in the farmhouse up on the Rittenhouse homestead in North Bend. Betty was very proud of her family heritage. William Rittenhouse came down on a flat boat and settled in North Bend in the late 1780s. She has the original deed signed by James Madison. She has several items in the Harrison-Symmes Memorial Museum in Cleves. Betty is preceded in death by husband of 40 years Linus Sehlhorst, her parents Herbert and Mabel Love Rittenhouse, her aunt Cora Rittenhouse, her brother Robert Rittenhouse and his wife Mary, her son in law Don McCane, and other family and friends. Betty is survived by her son Stephen and his wife Lauren, her daughters Dawn Valla and her husband Dan, Stephanie Kassman and her husband Mark, and her stepdaughters Barbara McCane and Cathy Sehlhorst, Grandchildren Noelle, Natalie, Nathaniel, Nevan and Nicole Valla, Joshua Kassman, Noah Sehlhorst, Deana Glazer, Maggie Wiseman, Sabrina McCane, Great Grandchildren Daphne and Sean Glazer, Jade McCane and Declan, MeiMei, Bishop and Dani Wiseman, and many other family and friends. Betty graduated from Taylor High School on D-Day, June 6, 1944. After high school, she attended some night school and worked at Shillitos. She met Linus at Sehlhorst the Florist, and they were married on August 10, 1963. After their wedding, she moved to Delhi to live at the greenhouse, where she worked for decades with him and the family. They moved back to Rittenhouse Hill where they built a house in 1974 on the family farm. Betty was a member of Cleves Presbyterian Church, and later became Catholic and was a member of St. Joseph. Betty was very active in her community and was a very generous person. She was involved with PTA, Band Boosters, Eastern Star, Girl Scouts, Miami Township Senior Center, Three Rivers Historical Society, and Ohio State Historical Society. Betty was in the First Families of Hamilton County and Ohio State, and finally was able to get into the Daughters of the American Revolution after Dawn found a missing piece of information. Betty was a 70-year member of Ohio Sigma Master of Beta Sigma Phi sorority. She volunteered at several places and delivered Meals on Wheels for many years. Her doors were always open for anyone who needed a meal, a place to stay or a friendly conversation. She was very dedicated to her kids and spent a lot of time driving them and others to school events and fun places. Betty spent the last 5.5 years at Bickford of Middletown. She really enjoyed her time there, making new friends and being involved in all the activities and events. She spent the last 2.5 months at Hillspring Rehab. The family would like to thank the staffs of Bickford, Hillspring and Hospice of Dayton for taking good care of their mother in her last years, months and weeks. Betty has donated her body to the UC Medical Center. If you feel compelled, please donate to the charity of your choice in honor of Betty or please do something kind for someone. Friends may greet the family Fri., Oct. 8 at 10 AM where the Memorial Mass will be held at 10:30 AM at St. Joseph Church, 25 E. Harrison Ave., North Bend, OH 45052.

Betty Rittenhouse Sehlhorst May 3, 1926 &#8211; July 16, 2020. Age 94. Betty was the last person of 5 generations of her family to be born in the farmhouse up on the Rittenhouse homestead in North Bend. Betty was very proud of her family... View Obituary & Service Information

The family of Betty J Sehlhorst created this Life Tributes page to make it easy to share your memories.

Send flowers to the Sehlhorst family.