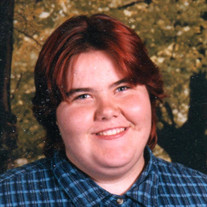 Amanda L. Lynch, “Mandi”, 36, passed away suddenly on April 2, 2020. Mandi was born in Omaha, NE at Offutt Air Force Base and was the beloved daughter of Jennifer (Patty) Holtman of North Bend, OH and the late Karl L. Lynch Sr. Mandi was a bonus daughter to the late Tim C. Holtman. She was also preceded in death by grandparents Hazel and Robert Lynch, uncle Steve Lynch and cousin James Patty. She is survived by grandparents Ann H. Patty of Cincinnati and Joseph C. Patty Jr. of Clearwater, FL and Ed and Marie Holtman of Okeechobee, FL. Mandi leaves behind her "awesome sauce" siblings, Mike S. Lynch (Lily) of Lancaster, CA , Rey M. Holtman (Hitomi) of Mesa, AZ, Brooke Hargrave of Marysville, CA, Maria P. Holtman (David Whitaker) of Chesterfield, VA, Tim J. Holtman and Travis C. Holtman, both of Cincinnati, OH. Mandi did not get to see her nieces and nephews often but loved being an aunt to Isaac Avila, Cynthia and Chris Lynch, Reynaldo Jr and Ellie Holtman, Cody Hargrave, Kyla Dechabert, and Kennedy and David Whitaker. She is survived by many aunts, uncles, cousins and friends. Mandi’s love of sign language started at an early age. Her father used ASL to facilitate communication during engine testing after he got out of the Air Force and worked for Aviall. She was further inspired by her aunt, Anita Kreger RID, who encouraged her to pursue a degree in the field of American Sign Language or Deaf Studies. Amanda graduated from Taylor High School and The Diamond Oaks Early Childhood Education Program. She attended Cincinnati State and received an Associate Degree in Deaf Studies in the Interpreter Training Program. Her most recent employment was as direct support personnel in a group home for adults with disabilities. A Celebration of Life for Mandi is planned to spread her ashes near Lake Norris while on family vacation and a tree will be planted in her memory in the near future on the grounds of the Miami Township Community Center. To honor her legacy please consider making a donation to the "Mandi Lynch Memorial Scholarship for Interpreter Training" online at cincinnatistate.edu/give and select from the dropdown menu or send a check written to the Cincinnati State Foundation, ATLC 352, 3520 Central Parkway, Cincinnati, Ohio 45223 noting the purpose. www.dennisgeorgefunerals.com Please use the following link to view the memorial picture video. https://www.tributeslides.com/tributes/show/CXXMYHKSNZR4WKNY

The family of Amanda L Lynch created this Life Tributes page to make it easy to share your memories.

Send flowers to the Lynch family.